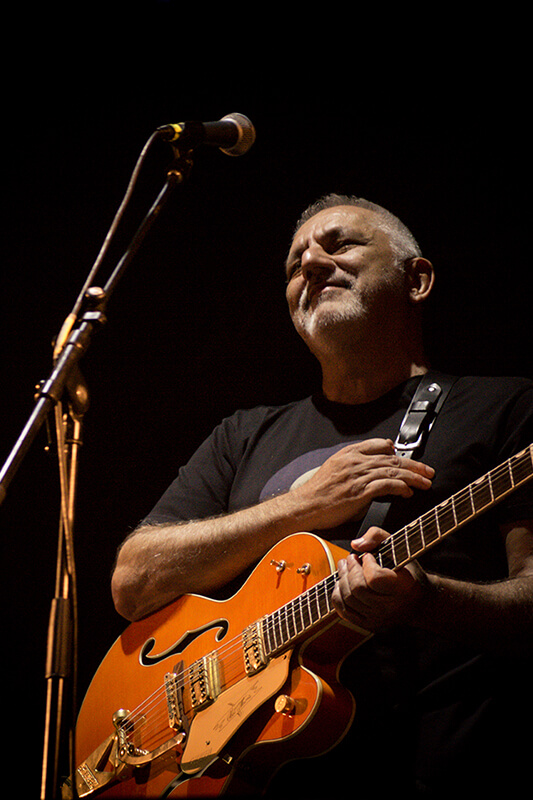 Nikos Portokaloglou was born in Volos on December 30, 1957. His parents were immigrants. He grew up in Nea Smyrni (Athens area) where he moved with his parents at the age of 4. His love for the guitar first started when he was an adolescent. At that age he bought his first guitar and started studying on his own, while listening to Rolling Stones, Beatles, Jimmy Hendrix, Bob Dylan, etc. When in high school he created a band with his classmates and played mainly songs from that period. In 1980 he created the Band “Fatme” along with his friends Odysseas Tsakalos (drums) and Dimitris Kalatzis (bass). Their first record was released in 1981 and the producer was Tasos Falireas. Later on, there was an addition to the band, Michalis Moustakis (keybords). The disbandment of the group came in 1989 and Nikos followed a solo career.

In the early 1990, the disk “Fones” was his new beginning as a solo career artist. During his career, he was highly appreciated by the great artists Manos Chatzidakis, Mikis Theodorakis and Dionisis Savopoulos. Apart from that, there are numerous collaborations with great singers, composers and lyricists like Charis Alexiou, Eleni Vitali, Eleni Tsaligopoulou, Giannis Kotsiras, Dimitris Mitropanos, Afroditi Manou, Stavros Logaridis, Nikos Ziogalas, Manolis Famelos, Dionysis Savopoulos, Xaris & Panos Katsimixas and many many others.

Today, in 2020, Nikos Portokaloglou is bringing with him, in his suitcase, 12 personal records, thousands of live performances and sold out concerts. This journey which lasts over 30 years, is full of melody and feelings shared with his friends and audience throughout his songs in all of his performances.

Watch the speech in the video below